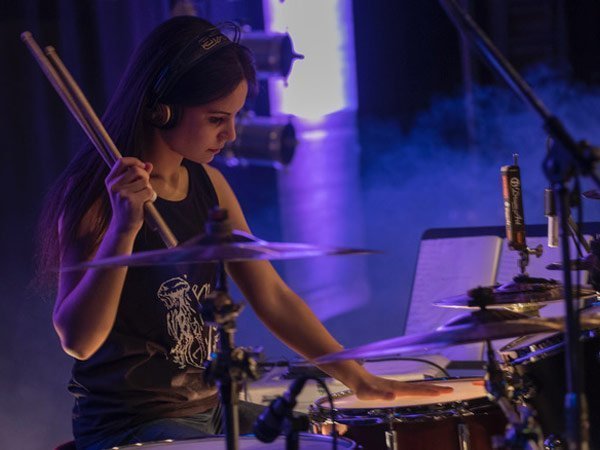 Elena Fratini was born in Montefiascone (VT), Italy, on October, 21 1995. She approaches drums when she is 13, the moment she sees drummer Massimo Stendardi playing live. With him, soon after she starts her study course. After a full year of intense study, Massimo Stendardi himself offers her a collaboration with Master Luca Capitani, founder of Scuderie Capitani, a network of drumming academies spread all over Italy. This way Elena joins the Scuderie in 2010, reaching the third level and getting closer to achieve her final degree. In 2017 she becomes a licensed teacher at Scuderie Capitani, and starts working at the Backstage Academy in Viterbo, where she still teaches today.

The studying years have always been accompanied by an intense live activity as drummer for many bands and music projects in central Italy. In 2011 she performs live with the Flog, a rock band from Rieti. In 2015 she joins Simone Gamberi’s band, a young songwriter from Viterbo who, in the same year, reaches the top rankings for the Sanremo Giovani selection, almost being able to jump on the Ariston main festival stage. In 2017 Gamberi and his band compete the final contest to participate to the major May 1st concert in Rome. In 2016 Elena replaces Massimo Stendardi for several live shows during Giosy Cento & i Parsifal Italian tour. In 2017 she joins Fiori Neri, the official Nomadi cover band, a band that has been active for more than 10 years. With this band she works for the Summer tour and starts working on their second original music album. In the same year, she also works for other music projects, including Gente Distratta, a Pino Daniele tribute band.